History of the Portuguese Water Dog 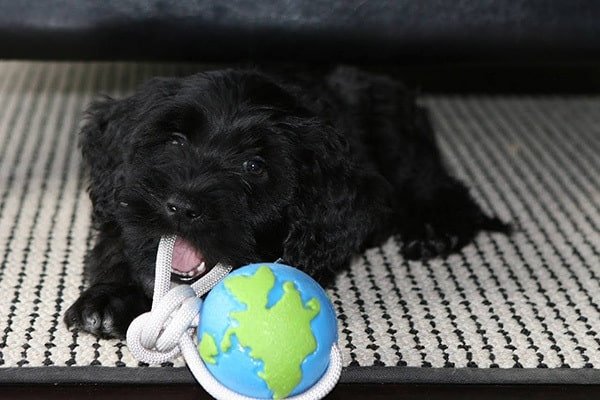 The single-layered, non-shedding, virtually hypo-allergenic coat comes in black, white or brown, parti-color (white with dark spots), black or brown with white markings, or even silver fox or gray. The body is slightly longer than it is tall; solid and sturdy. The topline should be straight and level. The brisket should reach the elbows, and chest should be broad. The head is large and broad on top with a pronounced stop occiput. The top of the skull should appear rounded. The heart-shaped ears hang down beside the head, but should not hang beyond the lower jaw. The eyes are dark and the teeth meet in a scissors or level bite. The tail starts out thick near the body, and then tapers. The legs are very straight, strong and parallel. It has more webbing between the toes than many other breeds, which aids in swimming.

The Portuguese Water Dog is a water-loving, lively but sensible, and loyal dog, affectionate and fun to be around. It is excellent with children and usually gets along with other dogs and pets without any problems. They need to get to know cats so that the company of them will also cause no problems. It has a stable, pleasant temperament. Brave, highly intelligent and trainable; keen to work and quick to learn and understand instructions. Training these dogs is not difficult if you understand the dog’s character. They are very sensitive to the tone of your voice. Alternate training and play, and bear in mind that this extremely intelligent dog will take liberties if you think you can just fit a bit of training in when it suits you. Make sure you are consistent. This breed may out-think its owner! Generally willing to please, this is an obedient dog, spirited, with great stamina, yet calm. Portuguese Water Dogs have a super sense of humor and love to be in the spotlight of attention. They make good watchdogs. Dominance, barking, and indoor activity level varies greatly with the individual. They have a very good sense of smell. Suitable for agility skills trials and numerous other dog sports Portuguese Water Dog puppies are notorious chewers.

The Portuguese Water Dog is an active dog with great stamina. It needs daily physical and mental exercise. This breed loves to swim and there is nothing they would love more than if you threw a stick or ball in water for it to retrieve. It will also enjoy long walks, jogs or a vigorous romp. They make excellent jogging companions.

Below, we will attempt to detail all the history of the origin and development of the modern Portuguese Water Dog.

On our layman’s tour, we’ll untangle fiction from fact through a portion of very fascinating ancient history. The Portuguese Water Dog’s story kindles the imagination and challenges the memory of any scholar of canine history.

Without the Portuguese Water Dog in their ancestries, there would be no modern Poodle, no Irish Water Spaniel, no Kerry Blue Terrier, no Labrador Retriever, no Curly Coated Retriever, and no Newfoundland… perhaps no Puli. The fisherman’s dog left his mark on all these breeds in various ways. Each is linked with each other, however subtly.

So that we may enjoy these links and fully appreciate the canine genetic camaraderie, we’ll trace the background from which the modern Portuguese Water Dog evolved…

Picture Asia, the one continent which was in immediate contact with every ocean and with every other continent. Picture the wild central Asian steppes (the Kirghiz area of Russia). Here, near the Chinese border were vast, grassy, treeless tracts, with scattered mountains, valleys, lakes and rivers relieving the Spartan landscape. The region is characterized by extreme temperatures. The Tien Shien Highlands, the Pamir Mountains, the Karagiye Depression, the Ural Sea and Lake Balkhash lie here. These are terrains and waters guaranteed to nourish ruggedness.

The early people who lived here were hunters in the Old Stone Age (Mesolithic). They were gatherers in the New Stone Age (Neolithic). They lived from the land, eating its grains. Eventually, they began raising grain of their own and made their clothing from sheep’s wool. Sheep were raised strictly for wool and cattle were raised for food. Depending upon the territory in which they lived, they also raised camels or horses.

Archeological findings indicate they reared herding dogs. Isolated from the rest of the world, full of courage and ferocity, the herding dogs were highly interbred within each ancestral clan. Some of these dogs developed into a definite type like the Portuguese Water Dog.

The perpetual tugs of wars resulted in frequent migration. The conquered, not waiting to count on miracles from the gods, took their animals and fled the steppes for the far corners of the world. The victors of the conflicts – Cimmerians (700-600 B.C.), Cimbri (100 B.C.), Goths (100-200 A.D.) – carried away herding dogs as well as other animals and people, as spoils of war. They spread these in all directions as they pillaged along the early roadways of the world. Before the captives finally settled in their new cultures, some had made incredible migrations.

Some Interesting Theories of Ancestry

One theory is that some of the rugged Asian herding dogs were captured by the fierce Berbers. The Berbers spread slowly across North Africa to Morocco. Their descendants, the Moors, arrived in Portugal in the eight century A.D., bringing dogs with them.

Another theory suggests that some of the dogs left the Asian steppes with the Goths, a confederation of Germanic tribes. The Goths divided. Those that went west were the Ostrogoth’s and their dogs became the German poodle or pudelin. The Goths that traveled south to fight the Romans were the Visigoths and their dogs developed into the Lion Dog. In 400 A.D., when the Visigoths invaded Spain and Portugal (then known only as Iberia), the dogs found their homeland.

There’s another possibility. Some of the long-coated race of water dogs could have grown up with the prehistoric civilizations of shellfish eaters in Spain and Portugal. These people were known as Iberians. They migrated from lands which now belong to southwestern Germany. Swarming over the Pyrenees, circulating over the whole of Western Europe, they established bases in Iberia (Portugal), as well as in Ireland, Wales and Brittany. The Irish Water Spaniel is believed to be a descendant of the Portuguese Water Dog. Certainly, in past times the breed existed in fishing villages everywhere along the coast of Portugal. In a technique passed down by the ancient Romans, he was taught to herd fish into a net. He retrieved lost tackle, broken nets, and acted as a courier from boat to boat and from boat to shore. He rode in the bobbing trawlers as fishermen worked their way to the cold fishing waters off the coasts of Iceland and Newfoundland, standing in the bow barking during periods of fog, thereby alerting other boats of the position of his boat.

In the sacred books of the Zend-Avesta (seventh century), the water dog was said to be the most valued of all dogs, including even the shepherd dog. The great god, Ashura-Mazda, gave him the qualities of a saint for his exceptional abilities.

Legend tells us that Zoroaster, the famed Persian prophet of the sixth century B.C., punished those who harmed a water dog.

In 1927, a monk reportedly described the Portuguese Water Dog that rescued a dying sailor from the sea: “The dog was of black coat, the hair long and rough, cut to the rib and with a tail tuft. This tuft was white as were the feet and nose.”

Water Dogs and the Armada

There’s also a popular theory that numbers of the dog sailed with the Spanish Armada in 1588, serving as messenger dogs between ships. Some of the ships of the Armada were in fact Portuguese since Portugal was ruled by Spain at the time. About 4,000 of the fleet’s more than 28,000 men were Portuguese. When their masters were defeated and some of the ships in the fleet were left to flounder, dogs supposedly swam ashore. This theory suggests that the Portuguese Water Dogs bequeathed some of their character and looks to such breeds as the Kerry Blue Terrier, Curly-Coated Retriever and Irish Water Spaniel.

Clifford Hubbard, who wrote Working Dogs of the World (1947), told a Portuguese author, Margarida Ribeiro, that the water dog was taken from Portugal to Spain during its occupation of Portugal (1580-1640). “As the dogs filtered into Spain,” wrote Margarida Ribeiro in a story about the Portuguese Water Dog, “they went to the streets where their robustness was immediately recognized. They were put at the service of the different ships in the invincible Spanish fleet, especially trained as life-saving dogs.”

King Phillip II of Spain had lists drawn up of every statistic of his ill-fated Armada. According to these lists, every one of the mainly unseaworthy 130 ships were crammed full of men and supplies. The convicts and slaves for oarsmen, plus a minimum of 300 soldiers, plus officers and their servants, gunners, priests, etc. Listed among the detailed inventories were horses and mules. These were aboard to later support the Spanish “conquerors” over the conquered English soil. But when the battle had been lost and the remnants of the Armada turned tail to sail home, the Spaniards when hard at sea, “to save water, which was the worst worry of all…threw overboard the horses and mules they had bought for the land artillery…A merchant ship that crossed the armada’s track reported the sea full of animals, still swimming.” Author David Howarth, who wrote The Voyage of the Armada, in which this text appears, conducted the bulk of his research at the castle of Simancas, Spain, where King Phillip established his archives. In all of these surviving documents, there is no suggestion of Caes de Aqua (Portuguese Water Dogs) being carried on the Armada. Looking at the matter logically, it is inconceivable that dogs, which require both care and food, would be allowed to take up space and time on these crowded ships. The hardships for humans aboard were unbearable. And the fleet did little cleaning up after themselves. Death from uneatable food and undrinkable water, from filth and infectious disease was rampant. Who would want to take care of and clean up after dogs on this disastrous undertaking? Oddly enough, listed in the fleet’s statistics were four small Portuguese galleys, oared. So the theory is possible! Still, most of the wild Irish, Scottish and English tribes living along the shorelines that first rescued and then often killed many of the scattered survivors seldom had food enough for themselves. It’s unlikely they would have allowed dogs that landed on their shores to remain alive instead they would have eaten them.